Despite all the warnings of the potential dangers of traveling in Mexico, caused by the many drug cartels that have bloodied the borders and shook the nation in the last few years, I felt pretty safe even when we drove through the smaller towns north of Puerto Vallarta to reach a little fishing village called Sayulita.

We crossed beautiful lush hills sometimes going only 15 miles an hour, driving behind old riggety pick up trucks with entire families packed in the back. We were packed ourselves (there were six of us squeezed in a mini SUV), but when witnessing scenes of real poverty, the perspective immediately changes. My heart sank after seeing so many people with so little just a few hours away from our comfortable existences. Sometimes I worry too much about helping countries across the globe struck by wars, famine or natural disasters, forgetting that a family or a child in Mexico or even in my neighborhood is in need. I really hope that this country will overcome its many problems and its economy will flourish so that more people will have a chance at a better life (following the footsteps of Brazil, a former third world country that has grown to become an important player in the global arena).

When we reached Sayulita, we were greeted by children playing on the unpaved streets, stray dogs, and families sitting in front of their houses chatting joyously. 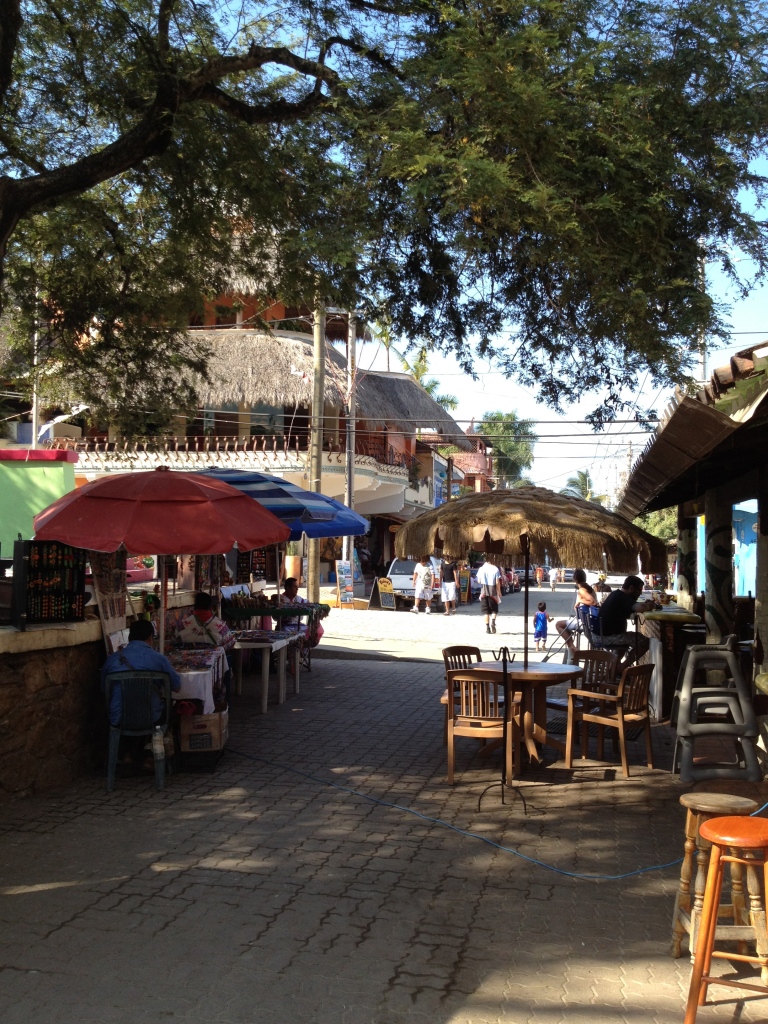 We parked our vehicle right in front of a coffee shop run by an American woman (many expats live in Sayulita) who assured us that street parking was good all day. We cruised down to the beach walking through beautiful porches and stopping only for a frozen chocolate banana at a corner cafe.

Once setting foot on the beach, I was surprised to see that the tranquil scenario we just met was replaced by a festive and loud party: There was music coming from the restaurants and at least half a dozen surf schools. We sat at a table right on the sand and ordered some Coronas and observed our surroundings; there were many tourists but also many locals mingling. The beach itself is not that big; it’s nested in a bay that generates perfect waves. It’s precisely for these constant perfect tides that Sayulita is considered every surfer’s dream, hence a great surfing destination. Lady Gaga sort of validated Sayulita’s reputation by taking surfing lessons herself during her vacation here a few months ago.

Since it doesn’t happen every day to get the chance to visit a world-famous surfing paradise, a couple of friends and I thought about renting a surfboard and taking some lessons. We picked the Costeno surf school among others mainly because, on the contrary of their competitors, their teachers were not all in the ocean overseeing other students, secondly, they were not run by a pack of chubby and funny 10 year olds and lastly, none of their teachers were missing any limbs (I swear, it’s true; one surfer dude from another school was missing an arm … which made us wonder how we could all learn.) So, fate put us in the capable hands of Adrian at Costeno; we first practiced on pedaling and standing on the board in the sand for half hour and then, we ventured into the ocean. The waves were so violent, I almost got swallowed by them; it was scary but Adrian helped me push my board against the waves and gave me some pro advices. Once we were far enough from the seashore, I positioned myself on the board and waited for Adrian’s signal to start pedaling. As soon as I felt the massive amount of water behind me, I started moving and off I went; I wasn’t quick enough to stand on my feet, though, so I basically surfed on my knees and jumped off the board before reaching the sand. Adrian was waiting for me at exactly the same point where I started so, with a lot of effort, I walked back against the tides to reach him. I will never forget his words of encouragement; even though, they were meant to push my limits against the tides of the ocean, I’ve been applying them ever since when I’m faced with any obstacle. I now like to use the analogy of the big waves or literally wall of waters to overcome any negative thought or difficulty. While laying on the board waiting for the next wave, Adrian looked at me in the eyes and said “It’s all in your head, if you think you’re not going to make it, then it’s not going to happen. You’re a big girl, you can do it!” Not that I’ve never heard these words before (I mean, I know tons about the law of attraction, I practice Buddhism and Kundalini yoga), but the context and the way this 20-something Mexican surfer said these words really touched my heart. I was so inspired that I eventually was able to stand on the board and ride my victory wave!

I was so high on life that I truly consider that day in Sayulita one of my happiest. After this surfing lesson, I joined our friends to our table and had an amazing seafood pasta at sunset.

Under a giant full moon, we walked back through some little streets. We went inside a few great stores; I fell in love with one selling huichol art, beautiful intricate designs made with colorful beads. This art dates back millenia. During spiritual rituals Shaman have visions which are transcribed into carvings, yarn art, and have evolved into t-shirts, boxed note cards, and framed art. Each image has spiritual meaning. I’m now the proud owner of a huichol owl.